As the official commercial arm of Cardano - the first third generation blockchain to evolve out of a research-first driven approach, EMURGO is devoted to building a strong team to drive the adoption of Cardano and add value to ADA holders with products such as our highly acclaimed Yoroi wallet, upcoming Seiza release (Cardano blockchain explorer), and dLab/EMURGO accelerator just to name a few! To create a truly international and decentralized workforce working to meet the needs of our community and build a global Cardano, EMURGO has talented staff from all over the world - Japan, France, the US, India, Hong Kong, Korea, Russia, Ukraine, and more on the way.

Welcome back to our “Meet the EMURGO Team” series! In this series, we introduce you to members of our talented workforce; take a closer look at who they are, and what they do behind the scenes. In the previous weeks, we introduced our Global Digital Media Manager - Keisha and Global Marketing Manager - Venus. This week, let’s meet another one of EMURGO’s fabulous marketing team members…

Albert also shares his thoughts in the video below, check it out now!

Here is also a short interview with Albert.

Albert: I’ve always been very interested in Cardano and the blockchain industry overall. I had a chance to interview and speak with EMURGO senior employees in my previous position and knew that EMURGO was an official Cardano partner to help grow the Cardano ecosystem commercially. EMURGO has a great brand image that is modern, hip, and tech-savvy with a passionate group of people striving to bring the adoption of Cardano into the mainstream. Also, I am based in Seoul and the EMURGO office is in Tokyo so that also was a nice benefit for me personally.

Albert: In my previous position, I was at Blockchain News Korea producing content and interviews with blockchain industry officials. I was lucky to have had the opportunity to meet several influential figures in our industry from leading projects and traditional business spheres including Charles Hoskinson. The first interview I organized was Charles Hoskinson who visited our offices in-person and we were able to have a terrific extended interview about his thoughts on blockchain and Cardano. I also have several years of experience doing human resources training & development prior to that.

It has now been about 3 months since you joined EMURGO.
What’s your role and can you tell me about your biggest achievement?

Albert: My title is Global PR Manager. I work in the Marketing department with a lot of other talented people from all over the world. My main focus is to clearly communicate about EMURGO and what we do to the outside world. So this means working a lot with conference organizers, crafting company press releases, meeting blockchain industry officials, monitoring news trends, producing reports, and so on. As we are a startup, this means I wear many hats and help wherever it is needed but I am mostly focused on increasing our follower base and letting people know about EMURGO in a clear way. I would say my biggest achievement in the short time that I’ve been here is meeting Jaide, a fantastic cryptocurrency fan in Seoul who was on a mission to only use cryptocurrency and get her to use an ADA Crypto Card and also to meet the EMURGO team in Tokyo. We filmed some good content showing the real utility of using ADA in the real world and it has brought a lot of EMURGO awareness on social media. I was happy to play a part in making it happen and taking a part of the credit!

Albert: I think blockchain technology is certainly going to play a bigger and bigger role moving forwards. Over the course of our civilization, technology continues to advance and be very influential in our everyday lives to make things more efficient and convenient. While technology sometimes has its own drawbacks, blockchain technology in particular can significantly change the financial industry among others. The openness of the Internet which allows the world to interact with each other has brought about smartphones, social media applications, Internet of Things, and so forth. Blockchain technology seems to be the next logical step in our technological evolution to make industries more efficient.

Albert: EMURGO is truly a global company. While we have more than 40 employees in several countries around the world, we communicate with each other regularly. The openness of the Internet has truly brought a number of great things for efficiency in all aspects of our lives. At EMURGO, we have a clear goal of driving the adoption of Cardano, an organized working structure with clear communication lines, and an openness to innovation and opinions. There is a positive energy here that makes EMURGO stand out compared to other companies.

What do you think about the atmosphere in EMURGO?

Albert: The atmosphere is very friendly and open. People respect each other and strive to be a team committed to clear goal. It’s very decentralized in that the employees work together in an open office setting and in remote settings as well. While there are obvious reporting lines to get things done, people communicate freely with one another and exchange opinions on various topics. All have a keen interest in blockchain technology and Cardano which certainly helps to create good vibes.

How do you feel about *EMURGO's core values?

Albert: We never want to take things for granted, of course. Especially in a startup in a young industry such as blockchain, we need to be bold, adaptive, and hungry. Things change quickly, the community is tuned into the latest developments, and projects are still vying to gain more awareness. I believe these values are compatible with our everyday lives as well. Cardano is a top ten project and these values will help us to become even stronger.

Albert: If you have an open mind, passion about Cardano, and an eagerness to learn, then join! Strive for greatness!

Yes: EMURGO team members are dedicated to building a global Cardano together with the community. We believe that the stronger the team we build, the stronger EMURGO and Cardano will be! We always welcome new talents to join our EMURGO family! If you are committed to driving the adoption of Cardano for businesses and organizations and adding value to ADA holders, please reach out to us on social media or email us now. 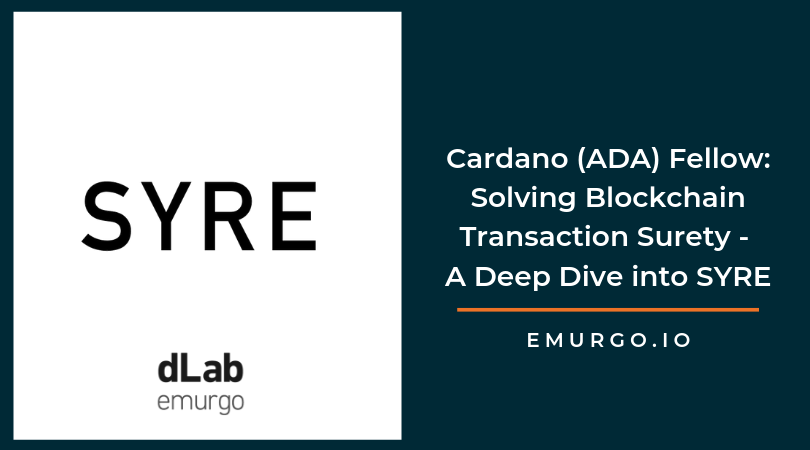 Following the recent release of EMURGO developed, Cardano blockchain explorer Seiza, we are proud to support Syre. Syre is a pioneering, tokenless invoice based protocol designed to make sending cryptocurrencies easy and worry-free 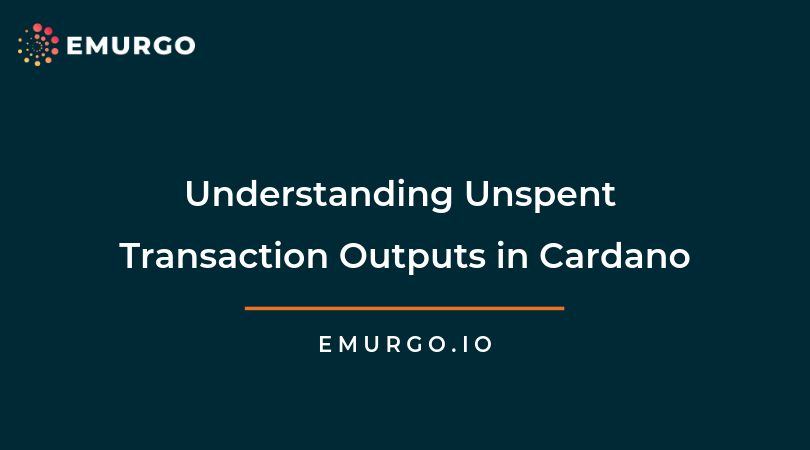 Unspent Transaction Outputs (UTxOs) are an important concept for new Cardano developers to understand. Every transaction on the Cardano Settlement Layer (SL) has at least one input and at least one output. The